It's HERE! BUY "Keepin' the Groove Alive!" 11 originals by The Groove Kings!

OH YEAH! Experience the Original Groove Kings Music CD ~Keepin' the Groove Alive~ released in June 2019! The 11 original tunes were restored & sent back home to Texas March 1, and since then we've taken care of business~ not an easy task with Gary Pavlica in Los Angeles and San Davis in the middle of planting season, but when the rains came, it was time to move the groove & share the sounds. Gary put his faith in his fellow Groove King with three words..."Finish it, San", and so he did.

~ Keepin' the Groove Alive has been burned & packaged at Atomic Disk with the support & expertise of Steve and Kayla Rosas of DRS Studio in Waco. What great friends and fans!

~Benevolent thanks to Ric Cabot Podmore of Colorado Sound for loving this project as much as we do. He dug deep into the Groove King's dungeon of treasure and found gold!

~ "Z", the documentary film is in its final editing stages at Shawtime Productions!

~BUY or Download "Keepin' the Groove Alive!" below or go to CD Baby.com 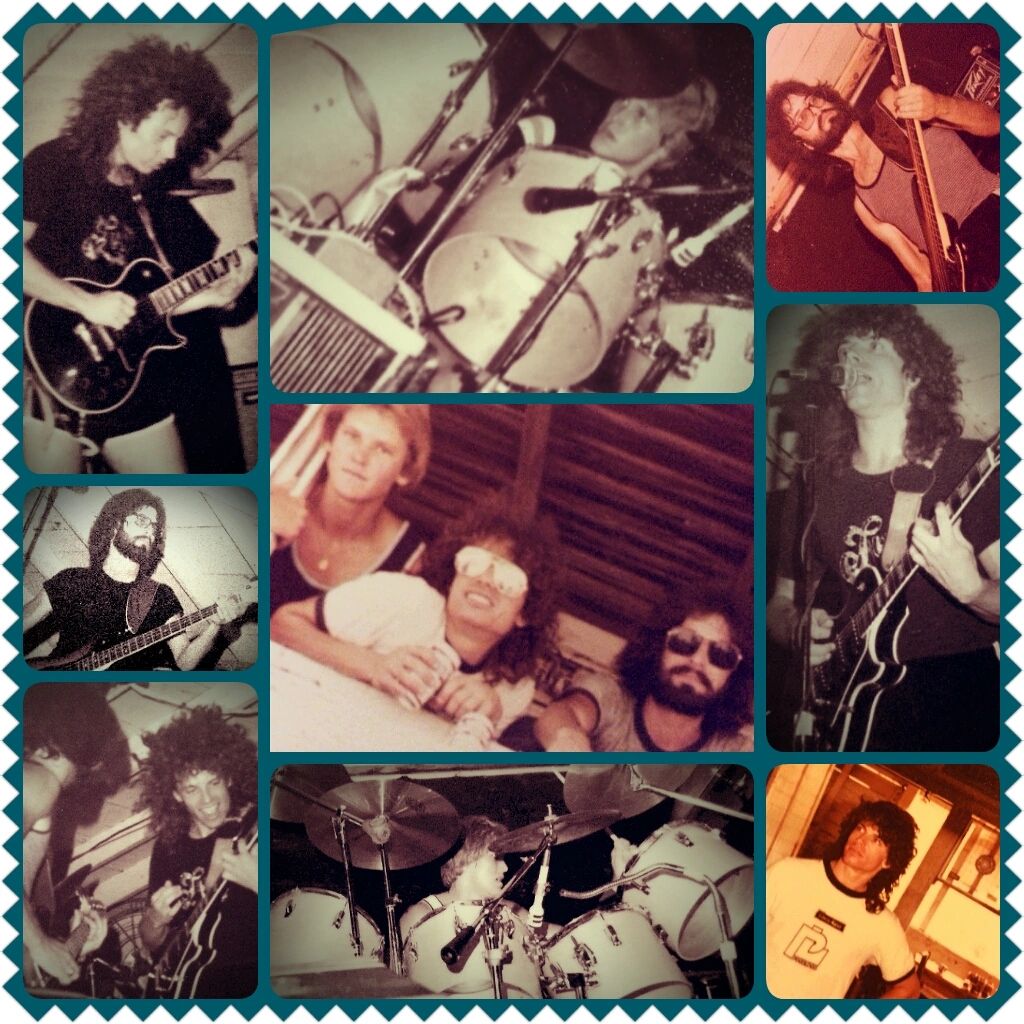 Read About David Zychek's Impact on Rock and Roll History~

Groove King-speak for "it's all good"and, of course, it's in the title of one of their most fun tunes featured on the newly released album of 11 original Groove King tunes after being restored  by  Ric Cabot Podmore of Colorado Sound Studios in Denver.

Another speculation (and you'll appreciate this if you've seen the Groove Kings live) is a CD of Blue Monday  at Waco's famed Waterworks where the guys were partying, playing hard rocking cover tunes by Trapeze, Queen, ZZTop, Pink Floyd, & Led Zeppelin, to name a few. George  Blackshear - Mockingbird Sound-was running  the board that night and decided to record the gig.  What resulted is pure fun & we're looking into  a way we can share this gem with GK fans as a tribute to the golden era of great rock bands & their music~

Keep Lookin' for the Groove!

2019 marks the year for the Groove Kings to share their gift of decades of hard rocking originals that have been heard throughout the great state of Texas from their beginnings in 1979 until David's death in 2016.  During this span of rock history, life happened. All three Groove Kings found love, got married, had kids, & spread out in different directions:  Gary set out for California where he still owns & operates Lone Star Construction in LA.  San kicked up the dirt on the family farm & worked in soil conservation building dams, ponds, and improving his own farmland which he still farms in central Texas.  And David never let his guitar rest! He formed other bands, joined other bands, toured the world, but never stopped lookin' for the Groove King. His last concert with his beloved soulmates was in December 2015, when Ted Nugent sponsored a fundraiser for David's medical bills.  Later that same month, David & San played together at the last Sefcik Christmas Party ever to be. It was there when David actually spoke out to decades of fans about his  failing health. He remained upbeat that evening calling up his two sons, Nathan & Zack, & brother Scott to the stage. For the first & last time in history, an ALL ZAJICEK BAND rocked the  walls of Tom Sefcik Hall.

Now this is “the man”, the official Groove King artist of the day: Tony Taylor, master commercial artist and devoted Groove King fan. Like  Zychek,  Tony left this world too soon but imagining these two artists stirring up the heavens brings us a smile.

Tony came to know David & Gary through bassist San Davis, Tony’s life-long childhood friend from Dawson, TX.  Back in the late ‘70s when the Groove Kings were honing their art, Tony was teaching commercial art in Waco, TX, at Texas State Technical College, his profession for 38 years, with 16 years as department head.

Tony and his Dawson sidekicks, Craig White and Jerry Shaw, kicked ideas around for promoting the Groove Kings and their rock solid musical style. Tony created the images for posters, t-shirts, and advertising. His Groove Kings logo was even emblazoned on the hood of Groove King die-hard fan Tim Pullin’s race car, (below) dedicated to the memory of David Zychek & the Groove Kings.

The CD’s inside cover of Keepin’ the Groove Alive is a tribute to Tony’s legacy and loyalty during the years the Groove Kings reigned over the Central Texas rock scene.

Above:   Original artwork edited to fit on "Keepin' the Groove Alive" CD.

The CD cover art is a tribute to the very first Groove King t-shirt—the first of many to follow; however, this particular t-shirt was the creation of beloved sound-man Charlie Brown. Charlie ran sound not only for the Groove Kings but for Zychek’s Head First and the many impromptu gigs featuring the most distinguished Central Texas rockers unsurpassed to this day.  "You just had to be there to understand the sound!"

~ Only a handful of these t-shirts exist 40 years later. Thank you Cherie and Steven Nesmith for donating yours for this album cover!

♫♪ ~ Catch Charlie Brown’s live interview about his days running sound in the documentary The Story of Z, to be released  in the near future by Troy and Anna Shaw's Shawtime Productions of Waco, Texas.

Photo Credits ~~~ You fill in the caption for this one! (Thanks Janie!)

Obviously these photos are old...

BUT~these photos are also priceless!  Imagine being a teenager or in your 20s or 30s and falling in love with the hard driving rock sounds of the Groove Kings. You want pictures!   You can't afford a 35mm Nikon or Pentax (and digital cameras are decades away & the high tech phone photo was unimaginable). So what could fans do to snap a photo of their favorite band?

Then 35mm cameras became more affordable as we grew up & became responsible adults with jobs! We bought cheap Vivitars, or the  KMart brand, but a few of us could swing for a Nikkormat or Canon. Figuring out f-stops & shutter speeds was stressful but finally, the automatic setting became available.

Then we had to deal with light, usually the lack there of.  35mm film had a range of light sensitivity so flash was not as important if you were willing to pay for an upgraded roll of film with an ASA over 400, but still, photos were not as tight  & true to their color as they could be in daylight.

When digital photography evolved, the core of Groove King fans were well into their 40s, maybe 50s! And still, many of us are learning how to finagle a tricky shot, use effective flash, compensate for poor lighting or busy stage lights, and then we have to learn how to download and transfer those carefully captured shots onto a computer to edit and possibly print!

So, in a nutshell, please understand the pure love involved in some of these photos. They have been through hell. Many have been found in old shoe boxes with moth-eaten corners. Some have been stuck to a yellow sheet of plastic for 30 years. Even Toots Pavlica bundled up what she could find in Gary's old room in Temple, TX, & lovingly mailed them to San. Once we received these "borrowed" photographs, we reproduced them as best as we could for this website.

We don't even know who took some of these photos, so if your name is not listed, please send us a friendly note via email to  Managing Editor Margie, aka the HBIC, at Margied333@gmail.  It will be a pleasure to add your name to this list of elite Groove King photographers.

~~Read past the banter (left) of how pitiful the photographic journey has been in capturing eons of light space in the rocked out world of the Groove Kings. If you find your name on the list, you are one lucky human bean. You were/are truly a friend, a close friend, maybe even slept in the same bed kinda friend;~)  In your artistry you captured a million points of light, heard a helluva band, danced, laughed, possibly drank a cold beer and partied with David, San, Gary & their extended families.

~~We sincerely thank you and love you!

May God bless you with remembrance & grace!

Z The Story of David Zychek